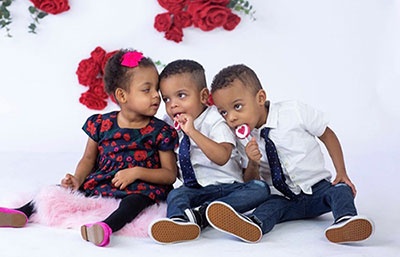 When the Fleming triplets were born seven weeks early, they were referred to The Arc of Warren County’s Early Intervention (EI) program while they were in NICU.

“The difficult moments that followed made it easier to cope with the support and guidance that the Early Intervention staff provided to me,” says Yerkis Fleming, mom to Frida, Sebastian and Carter. “They are extremely professional and genuine and have the best intentions for the families that they help. This is not just a job for them. They go above and beyond.”

The Fleming triplets received physical therapy, occupational therapy and developmental intervention therapy. Their daughter also received social work services and was directed to the New Jersey Commission for the Blind and Visually Impaired for additional resources. At five months old, Frida would be undergoing surgery. The Arc of Warren County’s EI team helped provide the Flemings with information during that critical time, which ultimately led them to the right medical team for Frida.

The triplets are now two and a half years old and the Flemings are embarking on next steps in preparing for pre-school for their children. They are evaluating their options with the help of their support network at The Arc of Warren County.

“The amount of coordination of care for the children has been overwhelming, but the professionals at The Arc of Warren County has expertly pathed this journey for us,” says Yerkis. “Their guidance has helped our family tremendously and I am forever grateful.”

The Arc of Warren County will be holding a Radiothon fundraiser with WRNJ on June 5, 2019 to raise funds for the programs that the organization provides to individuals and families in the community. Those who are interested in becoming a Very Involved Person (VIP) to help with this opportunity are encouraged to contact Annamaria Lalevee, Director of Public Relations and Fundraising at The Arc of Warren County, at (908) 223-0884 or at ALalevee@lm0mj.hosts.cx. Donations can be made online, as well at radiothon-lm0mj.hosts.cx.

The Arc is a national organization that serves individuals with developmental and intellectual disabilities and their family members since 1950. The Arc of Warren County is one of 700 chapters of The Arc and serves more than 1,100 people annually for the past 65 years. Programs include residential group homes and supervised apartments, day services, community-based supports, advocacy services, recreation and summer camp, Special Olympics training, early intervention and a wide variety of additional social services.

WRNJ (104.7, 92.7, 105.7 FM and 1510 AM) is known as “Northwest Jersey’s Own” and has been instrumental in helping raise over $1.3 million for the Arc of Warren in the course of 28 Radiothons since 1990. The station’s format features strong local news content augmented by the ABC Radio News Network. WRNJ is well known for its community involvement with strong personalities and features a music blend that combines “Today’s Hits & Yesterday’s Favorites.” WRNJ has been broadcasting locally since 1976 and is owned by Norman Worth and Larry Tighe.